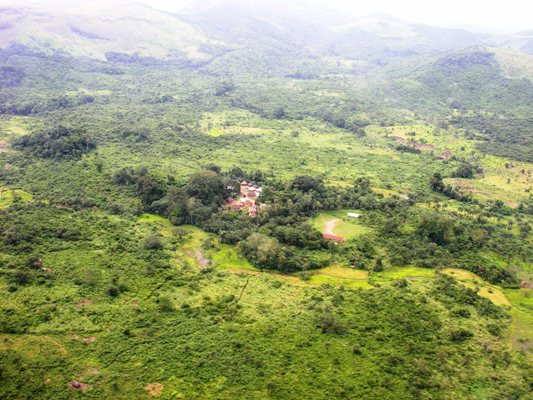 Typical landscape in Northern Sierra Leone; widespread deforestation with some trees only retained near the village

Like so many other areas in West Africa the practice of slash and burn agriculture continues to impact on the natural forest and its biodiversity. The Guinean Forests of West Africa are one of the most critically endangered regions on the planet and also one of the most fragmented habitats.
With a total land area of 71,325 km2, it is one of the smallest countries in coastal West Africa. Only 93,047 km², or 15 percent, of its original forest cover remains, with most of the remaining forest exploited for timber or threatened by hunting and therefore not representative of intact habitat.
The natural vegetation includes lowland moist and semi-deciduous forests, which constitute the westernmost extent of West Africa’s Upper Guinea ecosystem, as well as inland valley swamps, bolilands and wooded savannah. Ten major rivers form the drainage systems, flowing southwest and roughly parallel, from the northern uplands to the extensive mangrove swamps along the coast. The wildlife is typical of the Upper Guinea ecosystem with a few locally endemic species, but with numerous species that find their westernmost range in Sierra Leone. Most of the forested land in the country now is in forest reserves. In the 1500s, large areas of moist tropical lowland forest covered about half of Sierra Leone, when it is likely that that population densities were very low, and that most people practicing slash-and-burn agriculture would have had only limited and localized impact on the forest. Large scale agricultural change only began following the first wave of European colonization in the mid-sixteenth century, where demand for ship building stimulated logging of larger specimen trees.
The practice of clearing, cultivating and then letting land lie fallow is widespread is the major source of livelihood for the rural population. With human population increase, fallow periods are becoming shorter and the demand for richer soils provided by the remaining ‘virgin’ forested land continues to rise.
The net result of slash and burn is massive depletion of biomass, soil erosion and production of a sandy-type soil, that is drought prone and non water retentive as the heat of the scorching fires incinerates the thin organic matter, as well as the majority of the native seed bank. The rich forests that supported high biodiversity of plants and animals is replaced by a species poor swathe of species such as elephant grass, whilst the animals are increasingly targeted for bush meat, further reducing the biodiversity value of the land.
Bushmeat hunting is an important source of protein for rural West Africa and yet also one of the greatest threats to the region’s fauna. Growing urban populations, improved road networks, and increased access to forests have created a huge commercialized trading system for it both nationally and internationally.
Threats to biodiversity in the region are inextricably linked to poverty, which drives urgent short-term needs that often eliminate long-term opportunities.