Towards the end of June 2011, huge amounts of Sargassum started to wash ashore all along the beaches of Sierra Leone. The species looks like Sargassum fluitans which is one of the species that makes up the Sargasso Sea – in the Med there is more commonly S vulgare or S. hornschuci; but identification is not confirmed. People speculated about its origin, as local people had never seen anything like it before. There have been recent reports of huge casts like this from Half-Moon Bay and other sites in Antigua in the Caribbean. Some of them are seriously affecting resorts there.
I personally returned 9 stranded baby turtles back to the surf, as of course floating rafts of Sargassum can be an important shelter for baby turtles and other juvenile sea life.
The shores were fairly weed free for 6 weeks or so and then an even bigger quantity came in mid August 2011. 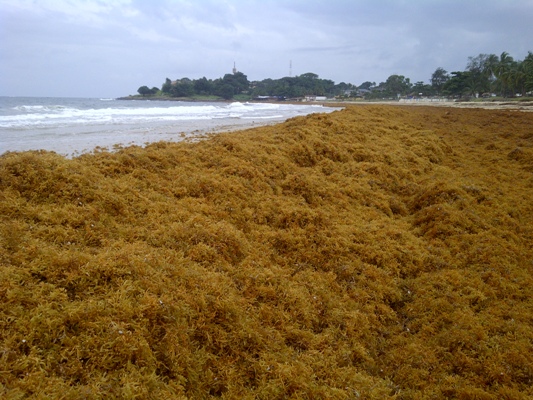 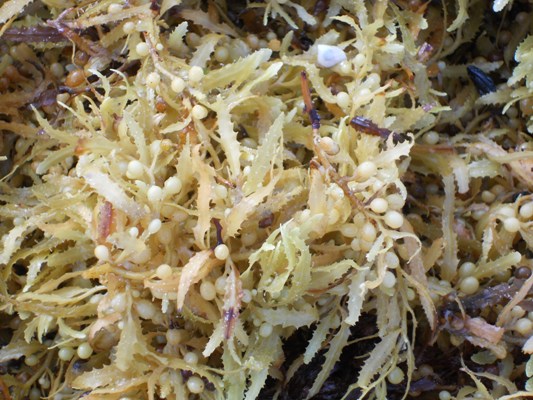 Close up of Sargassum in Sierra Leone

The extract below comes from http://arlohemphill.com/2011/08/change-is-in-the-air-seaweed-seaweed-everywhere/ where more info can be found.
Over recent weeks, scientists and resource managers in such diverse places as Trinidad, the Dominican Republic and Sierra Leone have been reporting unusual incidents of seaweed washing ashore in massive quantities. The seaweed is a type of brown algae known as Sargassum, which commonly drifts on ocean currents of the North Atlantic and Gulf of Mexico. This algae is well-known for washing up en masse on beaches in places such as Florida, Texas and Bermuda. What’s different this year is not so much the quantities, but the geography. The islands of the Lesser Antilles report never having seen this much of the seaweed before (although it is normally present in their waters), while the country of Sierra Leone has never known it under any quantity.