From 1996-1998 Andy was the Environmental Manager for the Management Consultants and Senior Environmental Adviser to the Government of Bangladesh for the project. Bangabandhu Bridge, also called the Jamuna Multi-purpose Bridge (Jomuna Bohumukhi Shetu), is a bridge opened in Bangladesh in June 1998 It connects Bhuapur on the Jamuna River‘s east bank to Sirajganj on its west bank. It is the now the eleventh longest bridge in the world, but was the 7th longest on construction[1] and the second longest in South Asia (after Mahatma Gandhi Setu). It is amongst the longest bridges in the world. It was constructed over the Jamuna River, mightiest of the three major rivers of Bangladesh, and fifth largest in the world in terms of volumetric discharge. 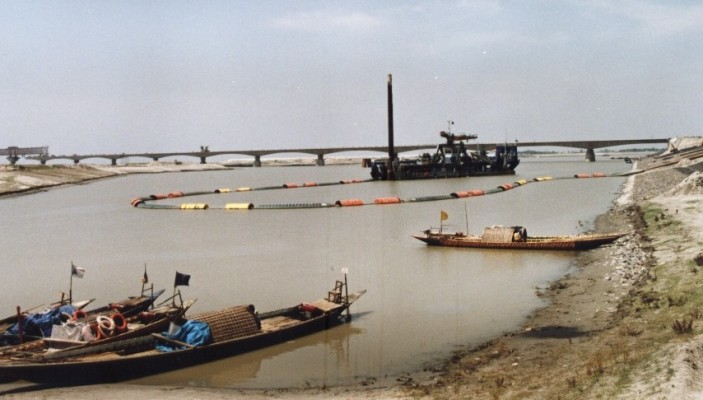 The bridge established a strategic link between the eastern and western parts of Bangladesh. It generates multifarious benefits for the people and especially, promotes inter-regional trade in the country. Apart from quick movement of goods and passenger traffic by road and rail, it facilitated transmission of electricity and natural gas, and integration of telecommunication links. The bridge is located on the Asian Highway and the Trans-Asian Railway which, when fully developed, will provide uninterrupted international road and railway links from South-east Asia to North-west Europe.[2]

Andy’s inputs included supervision and management of the environmental and social aspects of construction, which involved extensive dredging works to form the river training walls to prevent the Jamuna River from outflanking the bridge. He was also in charge of supervision of the huge programme of environmental and social mitigation, the EMAP, Environmental Management Action Plan, which included turning all the borrow pits for material into aquaculture ponds to feed the poor rural communities.

The river Jamuna (Brahmaputra), along with the lower stretch of the Padma (Ganges) divides Bangladesh into nearly two equal halves. Until now all road and rail communication between the two parts of the country has had to rely on time-consuming ferry services that were often disrupted because of navigability problems in the rivers. The need for a bridge over the river Jamuna was felt, especially by the people living in north-western Bangladesh, for a long time. This perceived need did not go unnoticed by the policy makers. The people and successive governments always longed to bridge the mighty Jamuna and thereby integrate the communication systems of the region. Popular leader Maulana Abdul Hamid Khan Bhashani first raised the demand for construction of the Jamuna Bridge at a political level in 1949. In the 1954 provincial elections of East Pakistan, the 21-point manifesto of the united front contained a demand for the bridge. On January 6, 1964, Mohammad Saifur Rahman, a member from Rangpur in the Provincial Assembly inquired about government’s intentions with regard to the construction of a bridge over the Jamuna. On July 11, 1966, Shamsul Haque, another member from Rangpur in the same Assembly, moved a resolution for the construction of the bridge and the house adopted it unanimously.

Accordingly, a preliminary feasibility study was carried out in 1969 by Freeman Fox and Partners of UK. They recommended a rail-cum-road bridge near Sirajganj with an estimated cost of $175 million. The estimates were preliminary in nature and a more detailed study was recommended. On the other hand, in his address to the nation over radio and television on the eve of general election in Pakistan in 1970, the Awami League leader Sheikh Mujibur Rahman mentioned the construction of Jamuna Bridge as an election pledge of his party. But all efforts were interrupted due to political unrest and liberation war.

After Bangladesh attained independence in 1971, the new government publicly stated its intention in 1972 to construct a bridge over the Jamuna and budgetary provisions were kept for the purpose in the 1972-73 budget. On being invited by the Bangladesh government, the Japan International Cooperation Agency (JICA) funded a feasibility study through Nippon Koei Co. Ltd. in 1973 on the construction of a road-cum-rail bridge over the Jamuna.

The JICA study, completed in 1976, concluded that the Jamuna project would cost $683 million with an economic rate of return (ERR) of only 2.6%. Considering that the project is not technically and economically viable, the government had abandoned the project. The government had, however, revived it later in 1982 and commissioned a new study to determine the feasibility of transferring natural gas to western parts of the country across the Jamuna. The study concluded that an independent gas connector was not economically viable. However, the consultants made an assessment of the engineering feasibility and cost of a combined road-cum-gas transmission bridge, which introduced the concept of a multipurpose bridge. It was estimated that a 12-km long bridge with three road lanes would cost $420 million. Upon consideration of the report, the cabinet made a decision to take immediate steps in pursuit of the project.

The Jamuna Multipurpose Bridge Authority (JMBA) was set up by an ordinance promulgated by the then President Hussain Muhammad Ershad on July 3, 1985 to implement the project. For mobilisation of domestic resources, another ordinance was promulgated by which a Jamuna Bridge surcharge and levy were introduced. A total of Tk 5.08 billion was mobilised in the process till its abolition.

In 1986, phase-I feasibility study for the bridge was carried out when the site between Sirajganj and Bhuapur (Tangail) was found to be the best. Between 1987 and 1989, the phase-II feasibility study was carried out when a road-cum-rail-cum-power bridge was found both economically and technically viable. Funding arrangements for the bridge were finally made with IDA, ADB and JBIC (formerly known as OECF) of Japan by the government of Bangladesh in 1992. Tenders were invited through international bidding for construction contracts in 1993. Contracts for the bridge, river training work and two approach roads were awarded in March 1994. The foundation stone of the bridge was laid on April 10, 1994. Physical implementation of the project commenced on October 15, 1994, and all the components except gas transmission line were completed by June 1998. The bridge was opened for traffic on June 23, 1998. 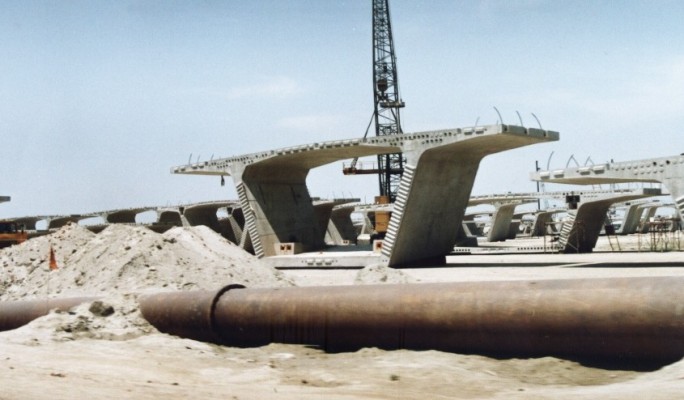 Jamuna Multipurpose Bridge[1] was constructed at a cost of $962 million. The cost of construction was shared by IDA, ADB, OECF of Japan, and the government of Bangladesh. Of the total, IDA, ADB and OECF supplied 22% each, and the remaining 34% was borne by Bangladesh.

The crossing has been designed to carry a dual two-lane carriageway, a dual gauge (broad and metre) railway, a high voltage (230 kV) electrical interconnector, telecommunication cables and a 750 mm diameter high pressure natural gas pipeline. The carriageways are 6.315 metres wide separated by a 0.57 metre width central barrier; the rail track is located along the north side of the deck. On the main bridge, electrical interconnector pylons are positioned on brackets cantilevered from the north side of the deck. Telecommunication ducts run through the box girder deck and the gas pipeline is located under the south cantilever of the box section. The bridge has been built by Hyundai Engineering and Construction (Korea) as a ‘design and build’ contract. TY Lin Assoc. of San Francisco carried out the design as a sub-contractor for Hyundai. The approach roads were constructed by Samwhan Corporation (Korea).

The bridge is supported on tubular steel piles, approximately 80 metres in length, driven into the river bed. Sand was removed from within the piles by airlifting and replaced with concrete. Out of the 50 piers, 21 piers are supported on groups of 3 piles (each of 2.5 m diameter) and 29 piers on groups of 2 piles (each of 3.15 diameter). The driving of 121 piles started on October 15, 1995 and was completed in July 1996. The pier stems are founded on concrete pilecaps, whose shells were precast and infilled with in-situ reinforced concrete. The reinforced concrete pier stems support pierheads which contain bearings and seismic devices. These allow movement of the deck under normal loading conditions but lock in the event of an earthquake to limit overall seismic loads through the structure and minimise damage.

The main bridge deck is a multi-span precast prestressed concrete segmental structure, constructed by the balanced cantilever method. Each cantilever has 12 segments (each 4 m long), joined to a pierhead unit (2 m long) at each pier and by an in-situ stitch at mid span. The deck is internally prestressed and of single box section. The depth of the box varies between 6.5 metres at the piers to 3.25 metres at mid-span. An expansion joint is provided every 7 spans by means of a hinge segment at approximately quarter span. The segments were precast and erected using a two-span erection gantry.

The Jamuna bridge carries both broad gauge and metre gauge rail tracks, and it is a 4-rail dual gauge line. It also carries pylons for a powerline.

Within a decade of inauguration, cracks were detected on the bridge prompting the authorities to impose limits on the number of vehicles allowed to cross at any given time. By early 2008, the government announced its intention to sue the South Korean conglomerate Hyundai for flawed design.[2]